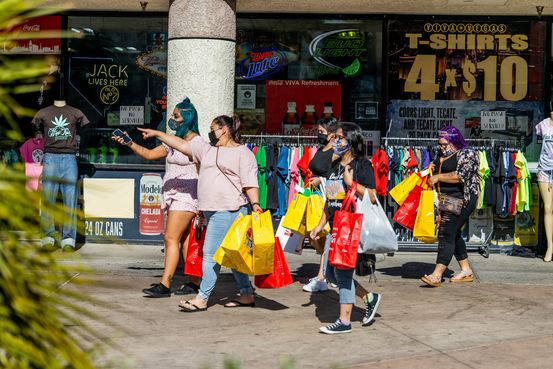 As investors weigh and reweigh the chances that the U.S. economy will run too hot, they should remember that the rest of the world isn’t close to recovering from the pandemic.

Globally, the economic outlook has improved, thanks to the ramp-up in vaccinations. On Tuesday, the Organization for Economic Cooperation and Development upgraded its forecasts for growth in world gross domestic product to 5.8% for this year and 4.4% for next year, compared with December projections of 4.2% and 3.7%, respectively.

Markets fear at least a small chance that the economy could overheat, given that Washington’s fiscal transfers have left the average American household with more disposable income than before. Measures of inflation have shot up in the U.S. and are on the rise in the eurozone, too, hitting a three-year high of 2% in May, data showed Tuesday. Surveys of manufacturing purchasing managers, which recorded their highest reading ever, pointed to supply-chain shortages.

This concern about too much economic growth, however, is a first-world problem—and, even there, a lopsided one.

The U.S. is the only major country in which expectations for 2025 GDP among Wall Street forecasters are currently higher than they were in January 2020. In other developed countries that have embraced fiscal activism, such as Canada, Japan and Germany, the economy is expected to be between 0.8% and 0.5% smaller than in pre-pandemic projections. The figure is closer to 4% for the U.K. and France.

The first word on what Wall Street is talking about.

The gap is widest among emerging countries. After avoiding some of the initial impact of Covid-19, these nations are now badly exposed to it. India has been heavily downgraded by forecasters after being ravaged by a second wave. They now believe its 2025 GDP will be 9% lower than previously estimated.

In Tuesday’s report, the OECD fretted that a big chunk of the lost economic output may be caused by a “permanent” reduction in capacity to produce goods and services—so-called scarring—rather than a shortfall in demand. Yet it also identifies the most scarring in poor countries, which on top of having more limited access to vaccines can less easily deploy fiscal measures without angering currency markets. Other nations where the OECD sees large supply-side losses are those reliant on tourism—an industry which, despite its current woes, isn’t really vulnerable to permanent damage.

“Potential output” calculations are notoriously slippery, and often just reflect recent economic trends rather than any upper limit on growth. Today’s fiscal activism is in part a recognition that problems once linked to productive constraints might have stemmed from weak spending. Even U.S. growth, which is now accelerating, remains well below its pre-2008 trend. The implication is that abandoning expansionary policies too soon is what really risks scarring the economy.

As developed countries emerge from the pandemic, an encouraging surge in spending is creating some bottlenecks. Looking further out, it is still a shortage of demand, not supply, that poses the greater threat to the world economy.