The Future of Everything covers the innovation and technology transforming the way we live, work and play, with monthly issues on health, money, artificial intelligence and more. This month is Cities & Real Estate, online starting June 4 and in the paper on June 11.

With record global temperatures stoking droughts and deadly heat waves, some scientists are eyeing audacious schemes to counteract global warming—from erecting enormous air filters to suck carbon dioxide from the air to launching millions of sunlight-defecting space mirrors into orbit around the planet.

Other scientists see the value of simpler tools: shovels and paintbrushes.

The shovels are for planting trees, whose shade has been shown to lower air temperatures in sweltering cities by up to 45 degrees Fahrenheit; the brushes for painting rooftops and other dark surfaces light colors that limit the absorption of temperature-raising sunlight.

Extreme heat can cause health problems ranging from exhaustion and dizziness to dehydration and even death; in recent years, heat has caused more deaths in the U.S. than hurricanes, tornadoes or floods, according to an analysis of weather-related deaths by University of Delaware scientists.

The Future of Everything

A look at how innovation and technology are transforming the way we live, work and play.

“The tree is such a fundamental and often overlooked piece of geoengineering,” says Robert McDonald, an urban ecologist at the Nature Conservancy in Arlington, Va. He is a co-author of a new study showing that the starkest tree cover disparities exist in the Northeastern U.S., where low-income blocks in many communities have up to 30% less tree cover and temperatures up to 7 degrees Fahrenheit hotter than more affluent neighborhoods in the same cities.

“Every city will have to think about increasing their tree cover,” says

at Yale University, an urban geographer who is assessing urban climate change adaptation for the Intergovernmental Panel on Climate Change.

In cities across the U.S., urban foresters have started planting trees by the million. Other researchers are perfecting the whitest white paint ever developed, to better reflect the sun’s rays.

A newly formulated paint at Purdue University promises to provide almost as much cooling effect on the hottest days as central air conditioning, according to research published recently in the journal Applied Materials & Interfaces.

The paint reflects 98.1% of sunlight—almost 10 times the amount reflected by conventional white paint. “It absorbs almost no heat from sunlight,” says Xiulin Ruan, a nanotechnology engineer who led the Purdue project. “It can save up to 70% of the air conditioning cost.”

The ultra-white paint, based on a solution of barium sulfate particles, is being developed for commercial use. With production costs similar to those of conventional paints, Dr. Ruan says, the paint could become a simple way for building owners and homeowners to help climate-proof buildings. 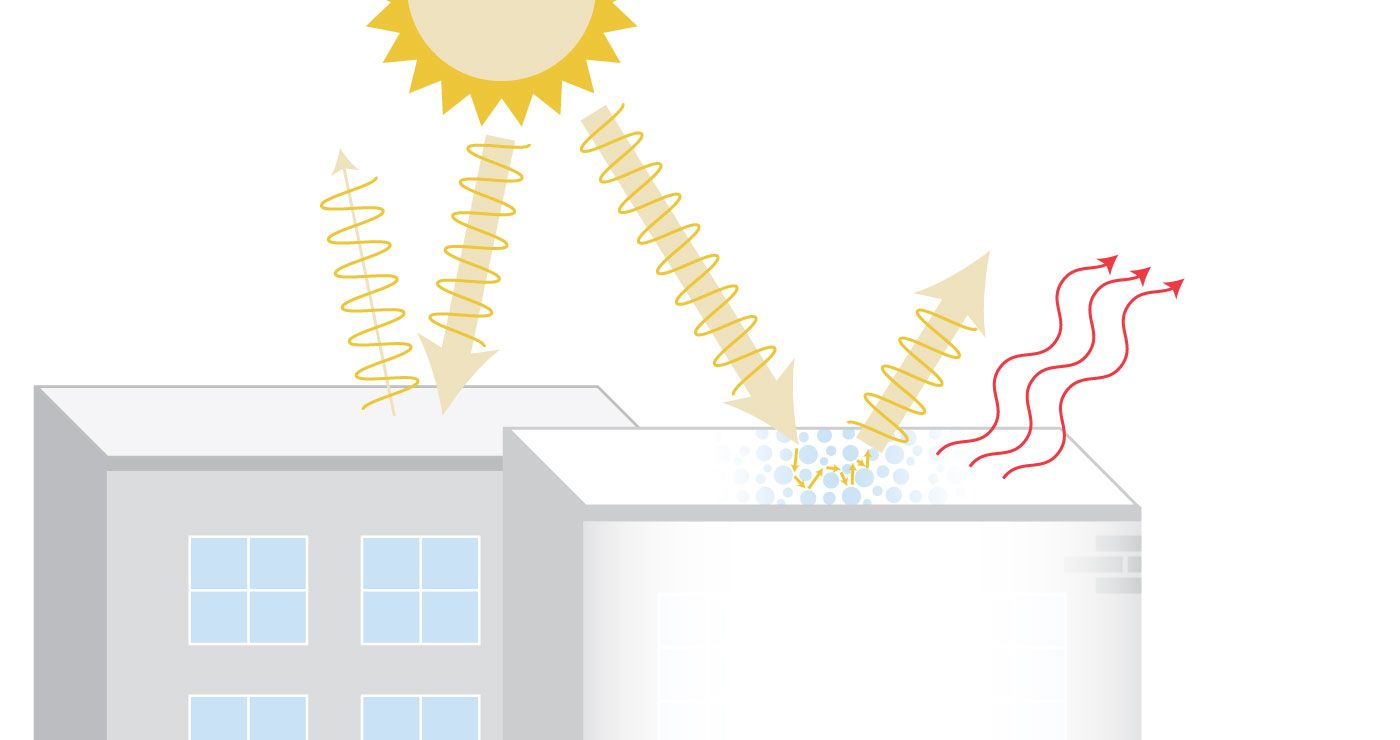 cooler than ambient air temperature during the day

and up to 19 degrees cooler at night, offering one

tool to help cities adapt to a warming world. 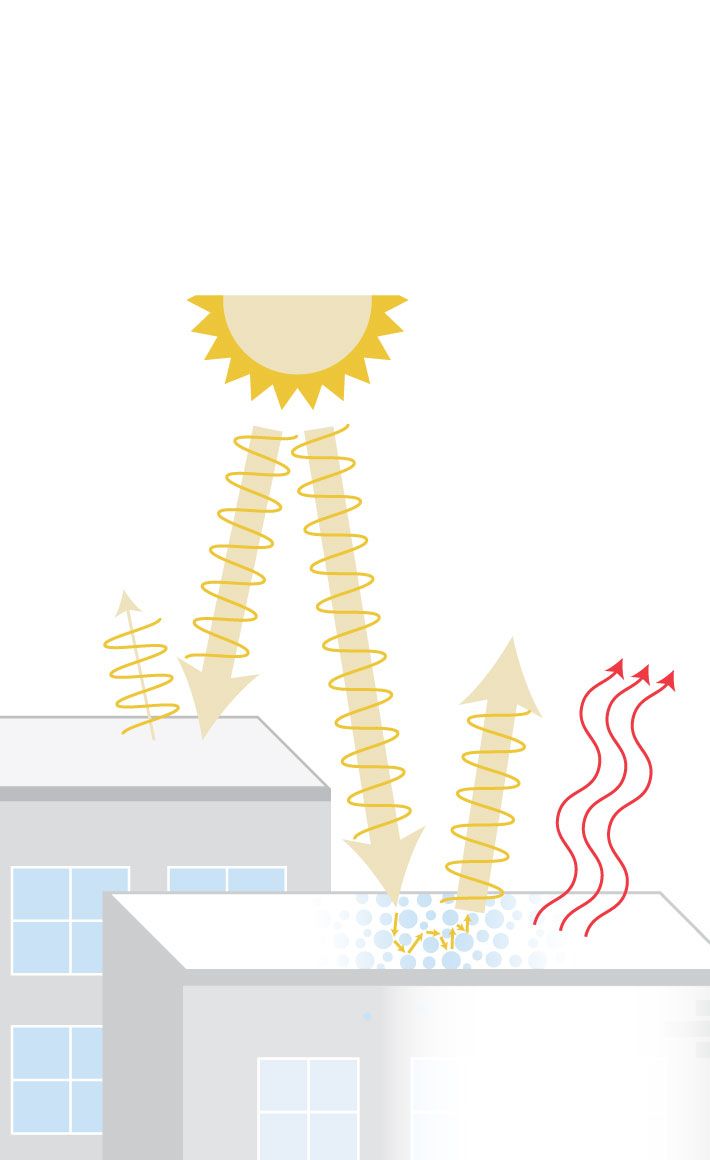 A new ultra-white paint developed at Purdue University keeps roofs and other surfaces 8 degrees Fahrenheit cooler than ambient air temperature during the day and up to 19 degrees cooler at night, offering one tool to help cities adapt to a warming world.

A new ultra-white paint developed at Purdue University keeps roofs and other surfaces 8 degrees Fahrenheit cooler than ambient air temperature during the day and up to 19 degrees cooler at night, offering one tool to help cities adapt to a warming world.

Building owners and roofing contractors have used light-colored shingles and ceramic coatings as well as paints for more than 20 years, according to the EPA and the Cool Roof Rating Council, which assesses the heat-reflecting properties of more than 3,000 roofing materials. At least 10 companies make light-colored substitutes for asphalt aimed at lowering the temperature of paved surfaces, according to the Global Cool Cities Alliance.

Solar-reflective white roofing costs about the same as standard dark roofing material and tends to be more durable, according to studies by the Lawrence Berkeley National Laboratory and others. The new ultra-white still needs more testing. “Our material is safe,” says Dr. Ruan. “We need to test its long-term reliability and make sure it is easy to clean and resistant to dust.”

The advent of high-resolution aerial imagery and geospatial mapping of tree cover across the U.S. by the U.S. Forest Service has helped spotlight the importance of trees in urban areas—and given cities new tools for tracking and protecting their trees.

The New York City Parks Department, for example, now maintains an online map of the location of every one of its 692,892 trees planted along streets, median strips and sidewalks, with the weeding and watering history for each as well as a cost accounting of the climate benefits it provides.

Google is working with the city of Los Angeles on an artificial intelligence system called Tree Canopy Lab that evaluates data on heat risk, population density and other factors to identify areas in need of more trees. Mayor Eric Garcetti has pledged to plant 90,000 trees by 2028 and increase shade in low-income heat zones by 50%.

Would you consider using the ultra-white paint on your roof? Join the conversation below.

“This is not an area that was lush robust forest historically,” says Los Angeles City Forest Officer Rachel Malarich. “We are planting trees to address urban issues like poor air quality and the urban heat island effect, which are caused by our own human activity.”

Until recently, Los Angeles lost trees to development faster than it could plant new ones. In the housing boom between 2000 and 2009, homes in the 20 largest cities in the Los Angeles Basin doubled in size while green cover for single-family home lots declined by up to 55%, according to researchers at the University of Southern California, even as the city launched a “Million Trees” tree-planting campaign.

Working with the city today, USC urban climate scientists are using air sensors and temperature data to pinpoint places where new trees would be most beneficial. “Sometimes there is a 40-degree Fahrenheit difference under a tree and standing in the middle of the street 30 feet away,” says John Wilson, director of the university’s Spatial Sciences Institute and a leader of the university’s Urban Trees Initiative.

USC scientists recently studied more than a thousand streets in a city where prolonged heat waves have tripled during the past century—and found that nearly a third had no trees at all. During a heat wave last September, temperatures in Los Angeles County reached 121 degrees Fahrenheit, the highest ever recorded there. By 2060, the city could see temperatures of 95 degrees Fahrenheit or higher on up to 40 days a year, according to climate projections by the American Meteorological Society and the University of California Los Angeles.

“Dropping city temperatures by one or two degrees could be substantial, and trees can do that,” says David Nowak, a senior scientist at the U.S. Forest Service. “If I could plant only one tree in the world, I would plant it in an urban center.”

The urban effects of warming

As they work to increase the number of trees, Chicago, Los Angeles, New York and other cities have enacted building codes to encourage contractors and homeowners to paint roofs and resurface streets and sidewalks with highly reflective paints and coatings.

“Cities are altering their own climate through land use changes and emission of waste heat,” says Brian Stone, director of the Urban Climate Lab at the Georgia Institute of Technology and author of “The City and the Coming Climate: Climate Change in the Places We Live.” “But that also gives cities direct control over their future warming. Cities can play a major role in slowing their own warming.”

Such efforts come amid worrisome new reports on rising global temperatures and their pernicious effects on city dwellers.

More From The Future of Everything

Temperatures in cities have risen at more than double the rate of planetary warming since 1960, according to an analysis of temperature trends in 50 major U.S. cities published recently in the journal Landscape and Urban Planning. Other studies showed that a city of a million people can be 1.8 to 5.4 degrees Fahrenheit warmer than the surrounding countryside, with a nighttime temperature difference of up to 22 degrees. Climate scientists say that is the result of concentrations of dark-colored, heat-absorbing rooftops, building materials and roads in urban areas.

As a result, urban heat waves are becoming longer, more frequent and more intense, affecting people in low-income neighborhoods more severely than people in affluent areas, according to new studies by the Environmental Protection Agency and others. Compounding the risk to city dwellers, urban power outages—and the resulting loss of air conditioning—have doubled in the past five years, according to a study published recently in Environmental Science & Technology.

But the new focus on trees and a brighter urban palette is raising hopes for more livable and more resilient urban areas.