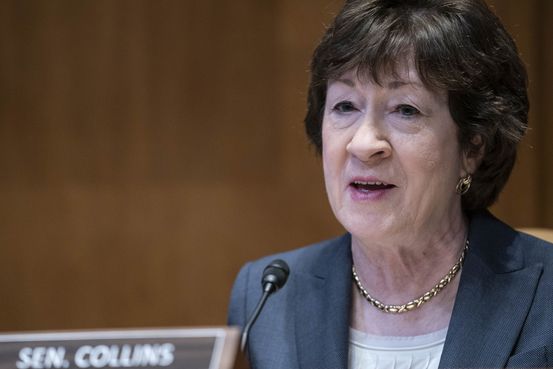 WASHINGTON—Prospects remained dim Sunday for a bipartisan agreement on an infrastructure-spending bill and a commission to investigate the Jan. 6 assault on the U.S. Capitol.

If those stalemates continue, Democrats may attempt to move on their own, using budget reconciliation rules to pass a tax-and-spending package without Republicans and assigning the Jan. 6 investigations to congressional committees they control.

(R., Maine), a key Republican whose vote would likely be needed for bipartisan deals on both measures, said the administration’s insistence on social spending makes an infrastructure bill difficult to reach.

“Negotiations should continue, but it’s important to note that there’s a fundamental difference here and at the heart of the negotiations is defining the scope of the bill: What is infrastructure?” she said on ABC’s “This Week” on Sunday. “I think we’re still pretty far apart.”

(R., W.Va.). The latest White House offer reduced its proposed spending from $2.3 trillion to $1.7 trillion. That is still more than triple the GOP proposal and the administration continued to stress the importance of including funding for elderly and disabled Americans.

“The human investment is important to the president,”

a White House aide, said on CNN’s “State of the Union” on Sunday. “He will not let inaction be the final answer, and he’s going to continue to invest in the American people and the infrastructure so that we can win tomorrow.”

Republicans say they would prefer to keep a bill smaller and more focused on items such as roads, bridges, ports and broadband.

Mr. Richmond said the president is willing to let the bipartisan talks continue. Even if the parties agreed on its size and composition, however, they are far apart on how to pay for it. Republicans have been more interested in user fees and repurposing unused money while the Biden administration is pushing a corporate tax increase that would reverse much of the 2017 tax law.

The discussions around the Jan. 6 attack on the Capitol also appear unlikely to succeed. The House passed a bill Wednesday that would create an independent commission.

“We should be coming together in a bipartisan way to do a thorough investigation to make sure that the second time in American history that our Capitol was taken is the last time,” said

That measure got 35 Republican votes in the House, but GOP leaders and senators have called the panel unnecessary and duplicative of law-enforcement efforts.

Several congressional committees are already investigating the government’s planning and response to the riot, and the internal watchdogs of four government agencies have also launched reviews of officials’ actions. In addition, the Justice Department’s criminal probe has led to charges against more than 400 people of offenses stemming from the Jan. 6 attack.

Ms. Collins said she supports a commission but wants to make sure its staff is hired in a bipartisan way and that it finishes its work this year.

She also said she was optimistic that those two issues could be resolved, citing a recent conversation with House Speaker

(R., Mo.) said it was too early to create a commission and that there was already bipartisan committee work happening.

“Is the priority to secure the Capitol, to do what we need to do to better train, better prepare Capitol police, decide what we want to do in the future,” he said on Fox News Sunday. “Or is the priority to take what will be a couple years, in my view, to decide what happened inside the White House?”

—Sabrina Siddiqui contributed to this article.