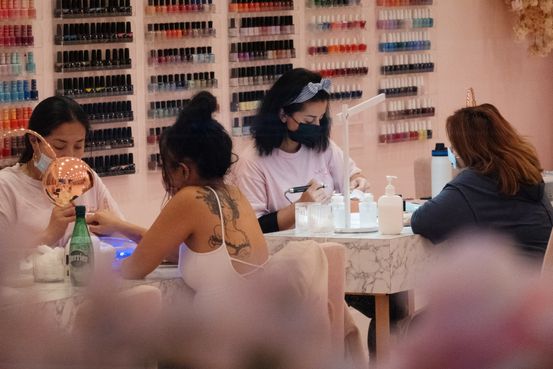 For much of the pandemic, housebound consumers in the West snapped up goods ranging from personal computers to treadmills. Now, as vaccination campaigns take hold, people are indulging in close-contact services—haircuts, dining out, live music events—that were off limits for so long.

That switch back to services is at the center of a high-stakes debate for businesses, economists and policy makers.

They must discern whether Western consumers’ new spending on services, in particular travel, entertainment and personal care, will come at the cost of cutting back on spending for goods. The answer has big implications, in particular, for inflation.

In a recent survey, business leaders in the eurozone told the European Central Bank that they expect some spending to divert away from consumer goods, a shift that could take the pressure off factories around the world that have strained to meet demand. That demand has created bottlenecks in supply chains, a scramble for raw materials and long delays in shipping—pressures that caused a sharp rise in prices.

Others, however, believe that it is unlikely an increase in spending on services as economies reopen will clear those logjams. Indeed, they believe that households have built up so much in savings that they can spend on both goods and services.

“I think that clearly in the near term, most households, not all but many, won’t be facing spending constraints,” said

an economist at the McKinsey Global Institute. “So the fact that they will start being able to spend more on services won’t necessarily mean that they won’t have the purchasing power to continue spending on goods.”

Figures for April spending in U.S. stores support that view. Retail sales were unchanged from March, a month that saw a 10.7% rise, and at a level that was higher than before the pandemic struck even as it became less risky to consume a host of services that typically involve close proximity to other people.

The pandemic has turned upside down normal spending patterns. Normally, recessions involve a decline in purchases of consumer durables—products that can last for years—because consumers can put off buying such products until their economic fortunes improve. Instead, they spend their money on immediate necessities such as food.

But during the pandemic, people spent big on durable products such as furniture, household appliances and home exercise equipment. Meanwhile, services that normally hold up during recessions were stopped or delayed. For example, in typical recessions, people continue to get their hair cut about as often as they usually do when the economy is growing.

However, the reopening isn’t just going to be the reverse of the shutdown, with spending on goods falling as spending on services rises.

In normal times, a surge in spending on services would require a slowdown in spending on other things, unless people were willing to borrow a lot more. Usually, people don’t have much money to spare, and they have to cut back on some spending to increase their other purchases.

But the buildup in savings changes that calculation. Globally, those savings are substantial. Oxford Economics estimates the total at $4.7 trillion. There is a lot of variation between countries where savings swelled, ranging from just under 12% of annual economic output in the U.S. to around 1% in Denmark, so there may be more constraints in some parts of the world economy than in others.

The distribution of those savings isn’t even among households. Broadly speaking, richer and older people have built up more savings during the pandemic than younger and poorer people.

So some people are less constrained than others. But in the U.S., the Biden administration’s new fiscal support program is set to ease constraints where savings are sparse, earmarking some $705 billion for transfers to poorer households in 2021.

“A significant share is targeted at lower income households,” said Corrado Macchiarelli, an economist at the U.K.’s National Institute of Economic and Social Research.

European governments haven’t yet decided to match those payments, relying on existing benefit programs. So U.S. households may be better positioned to spend during the reopening than consumers in other parts of the world.

Of course, spending on personal computers and other durable goods people bought more of during the pandemic could continue at current levels. But there were also a lot of things consumers didn’t buy during lockdown, for instance clothing, and it is likely that people will finally refresh wardrobes as they return to work and social spaces. So overall, goods purchases are likely to hold up.