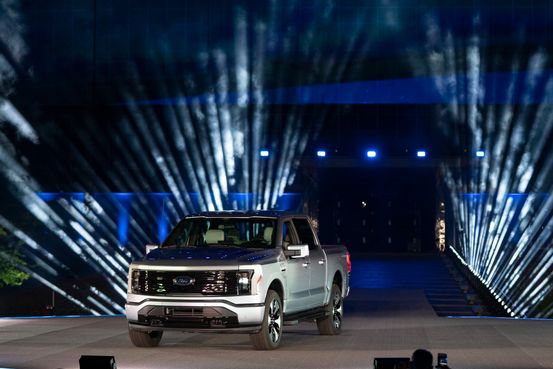 shares rose to their highest level in nearly five years, after the auto maker outlined a tech-centric strategy to electrify much of its vehicle lineup and sharply grow its commercial truck and van business.

Ford said it plans to boost spending on electric-vehicle development to $30 billion by 2025, roughly one-third more than it forecast earlier this year. The increase in spending—a total that includes some money spent in the past few years—is driven by Ford’s plans to eventually begin manufacturing its own batteries, including at two future U.S. battery-cell factories, with Korea’s SK Innovation Co.

Ford executives told investors during a virtual presentation that they expect 40% of the company’s global sales to be fully electric by 2030. Ford also aims to grow revenue from sales of vehicles and services to commercial clients by two-thirds, to $45 billion by 2025.

has emphasized since taking over in October: Electric vehicles, digital services and leveraging Ford’s strength with commercial customers, such as contractors, utility companies and government fleets.

Mr. Farley said introducing more plug-in vehicles to Ford’s lineup enhances the company’s ability to beam down new services and features to the car, such as adding hands-free driving in some situations. He said that should generate recurring subscription revenue and allow Ford to have an “always on” relationship with customers, rather than the industry’s traditional mode of simply waiting for vehicle owners to return to buy another car.

“These aren’t electric vehicles, they’re digital vehicles,” he said. “It’s the digital part that really unlocks all this capability.”

The nation’s No. 2 auto maker by sales said it has created an internal business called Ford Pro to serve commercial customers that maintain fleets of vehicles. Ford said it expects to grow sharply in that space by adding new electric vehicles, such as the F-150 Lightning revealed last week, as well as new services to help those customers do work and track their fleets.

Ford also said it would offer electric versions of some of its highest-profile vehicles at some point this decade, including the Ford Explorer and the Lincoln Aviator.

Mr. Farley said the combination of growth bets and fixes for nagging problems in Ford’s core manufacturing business will grow profitability over time. Ford said it expects in 2023 to achieve an 8% operating margin, up from around 4% in recent years. It had previously pegged the 8% mark as a goal but hadn’t specified a timeline.

Ford said Wednesday it has received 70,000 reservations for the new electric truck since the Lightning’s May 19 introduction. The company’s shares have rallied in the wake of the debut, which was punctuated by a factory visit from President Biden.

The Lightning drew praise from Wall Street analysts, who said the lower-than-expected starting price of around $40,000 should help Ford fend off several electric-truck startups expected to enter the market.

“It’s imperative for Ford to gain that beachhead in electric pickups now to maintain their dominance in pickups over time,” RBC Capital analyst

said in an investor note this week.

Ford has accelerated its electric-vehicle ambitions under Mr. Farley, who began his career at Toyota and spent many years as Ford’s marketing chief.

Do you think Ford will be successful against EV rivals? Join the conversation below.

Ford said its proprietary batteries, named IonBoost, will allow it to reduce the cost of its battery packs by 40% by mid-decade. Mr. Farley says Ford also is developing so-called solid-state batteries, which don’t transfer ions through liquid and would have higher energy densities and lower costs.

Still, Ford’s electric-vehicle strategy has been seen by some analysts as lagging behind

, which is providing its electric-vehicle technology to Ford for future plug-in offerings in Europe. GM and VW both have outlined more-aggressive timetables for transitioning their vehicle lineups to electric and moved more quickly into battery-cell production.

GM earlier this year said it plans to mostly phase out gasoline- and diesel-powered vehicles from its showrooms globally by 2035.

said the company’s recent moves to electrify the F-150 and get into battery production, and strong demand for the Mach-E SUV, show that Ford isn’t trailing rivals.