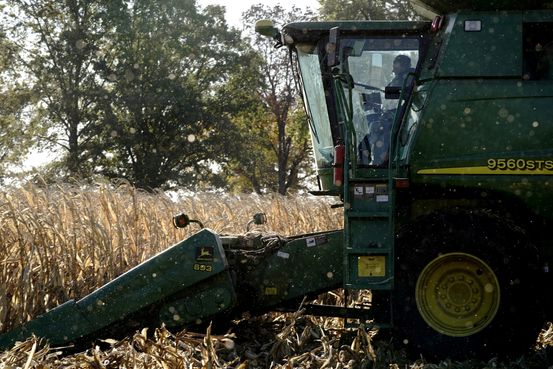 The run-up in commodity prices is casting a cloud over the global economic recovery, slamming vulnerable businesses and households and adding to fears that inflation could become more persistent.

The world hasn’t seen such across-the-board commodity-price increases since the beginning of the global financial crisis, and before that, the 1970s. Lumber, iron ore and copper have hit records. Corn, soybeans and wheat have jumped to their highest levels in eight years. Oil recently reached a two-year high.

Economists are expecting consumer-price data due later this week to underscore the trend. They say China’s producer-price index, a gauge of factory-gate prices, could climb to its highest level since August 2008 on Wednesday amid rising commodity prices. The U.S. consumer-price index, released a day later, is expected to show a sharp rise in the 12 months through May, also driven by higher labor costs.

Ordinarily, economists and central bankers try not to worry too much about commodity-price moves. Commodity prices can be volatile, and they make up a smaller part of consumer inflation than other costs, like housing.

But manufacturers’ profit margins are shrinking because of higher costs for raw materials. Households are paying more for gas, groceries and some restaurant bills, curbing their ability to spend elsewhere. In poorer countries, some are going without basic needs entirely.

“We are being hit from every possible angle,” said

chief executive of Quaker Bakery Brands Inc. in Appleton, Wis. He says his costs for items including wheat, energy and new aluminum equipment have shot up at least 25% to 35% this year.

Customers protested when his firm lifted prices for pizza crusts, burger buns and other goods by as much as 8%, but more increases might be needed.

“The scary thing is, we don’t really see an end in sight to these cost pressures,” he said.

“
‘The scary thing is, we don’t really see an end in sight to these cost pressures.’
”

Many factors are driving the increases, including ultra-strong consumer demand and supply-chain bottlenecks. But behind many of them, many economists say, is a deliberate decision by policy makers in the U.S. and elsewhere to run their economies hot for now, with lots of stimulus, to ensure they recover fully from damage caused by Covid-19.

Central bankers must decide whether they can keep looking past commodity-price increases, along with other signs of higher inflation, or must move faster to cool demand through rate rises or other moves. In the 1970s, many countries gave priority to jobs and growth over controlling consumer prices during a series of oil shocks, and experienced high inflation.

Officials at other central banks, including the Federal Reserve and European Central Bank, have remained sanguine. At an event last month, ECB chief economist

“You need a strong labor market” to get more persistent inflation, he said.

ECB officials are expected to increase their forecasts for eurozone inflation this year at a policy meeting on Wednesday and Thursday, while extending aggressive stimulus policies that include subzero interest rates and large-scale bond purchases.

Commodities generally make up a relatively small part of consumer prices. They are mainly used for producing goods as opposed to services, which are a bigger part of developed-world economies. Goods make up about 20% of the weighting of the U.S. consumer-price index.

Academic work also suggests that the impact of commodity-price shocks on inflation has fallen in recent decades, as elements such as branding have become important in final costs.

a business economist at the Federal Reserve Bank of St. Louis, recently found there was a fairly small correlation between the costs of an index composed of industrial materials and one looking at prices for durable goods.

Commodities also have come to play a smaller role in final production as businesses become more efficient, according to research by economists at the Federal Reserve Bank of New York. The U.S. roughly tripled its economic output per kilogram of oil consumed between 1990 and 2015, according to the World Bank.

“Oil used to be important enough to swing inflation, but now no commodity is,” said

a former ECB economist now at

Still, commodity prices could be decisive at a time when other forces are pushing prices higher, Mr. Schumacher said.

“If you think fiscal policy in the U.S. is overdoing it, then commodities could be the final bit needed to ignite a self-reinforcing price spiral,” he said.

Surging commodity prices also can be an early warning of future inflation because commodity markets react more rapidly to changes in the economy than prices for final goods.

The impact of oil’s climb already is showing up in consumer-price data: Figures for the eurozone showed consumer prices were 2% higher in May than a year earlier, the fastest rise since late 2018, largely because of energy.

In the U.S., it now costs an average of $1.02 a gallon more to fill up a gas tank than a year ago, according to GasBuddy, which analyzes fuel prices.

The Food and Agriculture Organization of the United Nations said global food prices rose in May at their fastest monthly rate in more than a decade, led by surges in products such as vegetable oils and cereals that are crucial to developing world diets.

are raising prices of goods including the latter’s Jennie-O ground turkey.

of Utah-based food-service distributor Nicholas and Co., says shortages of soybean oil mean he is rationing deliveries of frying oil to restaurant customers, some of whom have paid triple their normal cost for the oil.

Mr. Jeppson has been looking for new products to help restaurants preserve their frying oil. Soon, he will begin promoting coated, not battered, french fries, and battered, not breaded, onion rings, which he says will create less buildup in deep fryers, stretching the life of a restaurant’s oil.

“Battered onions will still wreck your fryer, just not as quickly as breaded,” he said. “It’s a nightmare.”

Economists note that some commodity prices, notably crude oil, are merely returning to pre-pandemic levels. Recent sharp increases are built on comparisons with mid-2020, when consumption was depressed due to the pandemic.

Many also believe commodity-price growth will subside later this year as some U.S. consumer spending shifts to services, which are less commodity-intensive. Chinese consumption of industrial metals, which is about half of global demand, is expected to fall as Beijing reins in credit growth, according to Capital Economics.

special adviser at Oxford Economics in London. “A lot of commodity prices will go broadly sideways for the next three to six months.”

senior global economist at JPMorgan Chase Bank, says that while higher prices for raw materials will probably result in temporary inflation pressures, it won’t make much of a dent in the U.S. economy.

Much of the recent inflation uptick is due to the frenzied nature of the economy’s reopening, with firms scrambling to find workers and resolve freight bottlenecks, he said, and the economy is strong enough to weather it.

The commodity boom also has winners: It is creating a windfall for farmers and agribusinesses, lifting prices for U.S. farmland and benefiting commodity-exporting nations.

Brazil’s economy returned to pre-pandemic levels in the first three months of this year, boosted by agricultural exports of soybeans, coffee, sugar and iron ore.

PLC could this year generate a combined $140 billion in earnings before interest, taxes, depreciation and amortization, according to Royal Bank of Canada. That compares with $44 billion in 2015, when metals prices were at or near lows.

However, in Russia, a commodity exporter, surging commodity prices also are driving up inflation. While Russia’s international reserves hit $600.9 billion in May, the highest ever, its central bank increased its benchmark interest rate by 0.5 percentage point to 5% in April. It said it would consider further increases, citing “pro-inflationary risks generated by price movements in global commodity markets.”

“We think that the inflation pressure in Russia is not transitory, not temporary,” Russia’s central-bank governor

told CNBC in a recent interview.

In China, factory owners have increased prices or been forced to halt operations to offset losses from higher raw material costs.

At Hong Miao Toy, which produces dinosaur and educational toys in the city of Chenghai, founder

says the company’s profit margins have fallen 30% this year.

“I haven’t seen any raw material whose cost hasn’t gone up this year,” Mr. Lin said. “I don’t think we will ever return to the time before Covid.” He expects plastics costs to go higher as crude oil rises.

, said in May that it expects an impact of 500 million euros, equivalent to about $608 million, from prices for raw materials. Increased steel prices have added about $515 to the cost of an average U.S. light vehicle, according to

an auto analyst at GlobalData.

BSA Machine Tools, which makes lathes and other machines used in manufacturing, has been pushing back as suppliers of steel, aluminum and other components try to increase prices. “Otherwise, inflation is going to rise,” said

an adviser to the Birmingham, England-based company and its former managing director.

But in January, the company raised its own prices by around 5% to 6% to reflect extra costs. “We have no choice,” he said.

—Stella Yifan Xie and David Harrison contributed to this article.