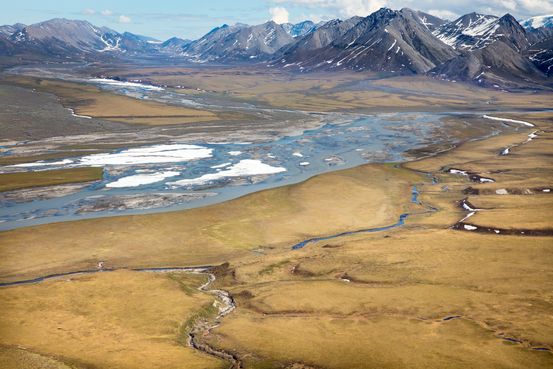 The Interior Department said the program will be on hold until it completes a comprehensive analysis under the National Environmental Policy Act. The review could ultimately lead to the leases being voided altogether, the department said.

The decision is the latest twist in more than 30 years of fights, often highly partisan, over how to manage what many consider some of the country’s last unspoiled wilderness.

Republicans and oil interests are still adamantly pushing for industry’s right to explore this remote northeast corner of Alaska. Even so, it comes at a time when the industry’s interest in working there has waned significantly.

Select breaking and enterprise stories about energy markets and businesses, through news alerts delivered to you via email.

Under pressure from Wall Street to reduce costs and raise profits, oil companies have been shying away from expensive and delicate megaprojects, damping interest even in what was considered among the last great frontiers in North American oil.

The bidding process in the Arctic refuge, finished days before former President

left office, produced no offers from major oil companies, and only $14 million in high bids—far from the billion dollars projected by the Congressional Budget Office just three years before.

Even so, oil industry groups supported the leasing to ensure future access to the region. Kevin O’Scannlain, vice president of upstream policy at the American Petroleum Institute, said most Alaskans also supported drilling in the refuge.

“Policies aimed at slowing or stopping oil and natural gas production on federal lands and waters will ultimately prove harmful to our national security, environmental progress and economic strength,” he said in a statement.

Mr. O’Scannlain had been one of the top lawyers at Interior overseeing the program’s development under Mr. Trump and noted that the agency had completed an analysis under the National Environmental Policy Act, or NEPA. Finished in 2019, the analysis found that the program would have a negligible environmental impact.

But the Interior Department now says a review—ordered by President Biden on his first day in office—identified defects in the Trump administration’s final decision to approve new oil leases in the refuge.

That is because the first environmental impact analysis under NEPA from 2019 didn’t properly analyze “a reasonable range” of alternatives for allowing and managing oil development while mitigating environmental harm, the Department said Tuesday.

The refuge—an area about the size of South Carolina where Alaska meets the Beaufort Sea and Canada’s Yukon—is home to polar bears and caribou herds. It has few people and roads and has been off limits to drillers, miners and other developers for decades.

The Trump administration had been developing the oil program under a congressional mandate, passed under Republican leadership in the tax overhaul of 2017, to lease oil rights in the coastal plain of the refuge. The first lease sale was finished just days before Mr. Trump left office.

But Mr. Biden, as a presidential candidate, had pledged to find ways to stop the program and restore protections for the refuge.

His administration’s decision Tuesday was cheered by environmentalists. Many have expressed disappointment that the administration in recent weeks has filed court arguments supporting several oil and mining projects on federal land, including other spots in the Alaskan Arctic.

The decisions, which the administration said were based strictly on legal considerations, improved Mr. Biden’s standing with some lawmakers in Western oil-producing states, whose support Mr. Biden needs to get his nominees and initiatives through Congress.

—Timothy Puko contributed to this article.

Educating Young Minds One Day at a Time

The Special Education Process – What is It?

Education – A Bright Spot in a Dreary Economy