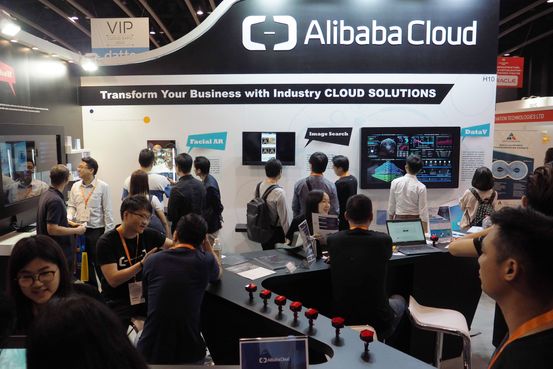 Pressure is mounting on Alibaba’s cloud-computing division after years of breakneck expansion, as competition in the industry intensifies and political issues hurt the Chinese company’s ability to win business overseas and government contracts at home.

Alibaba investors have banked on cloud computing to drive significant growth, as competition in the company’s main e-commerce business heats up. In recent months, however, the cloud unit has parted ways with a major customer, was given the cold shoulder by some Chinese government clients and has overhauled its organizational structure, people familiar with the matter said.

reported last week that cloud computing revenue grew 37% in the quarter ended March 31 from the same period a year earlier, the slowest quarterly growth since it went public on the New York Stock Exchange in 2014. The company said the slowdown was due to the loss of a major Chinese internet client’s international business due to “non-product related requirements.”

That client was ByteDance Ltd., the owner of the social-video app TikTok, which terminated a deal to store its international data on Alibaba Cloud, some of the people said. When ending the relationship, ByteDance bought servers from Alibaba, they said.

The moves reflected Beijing-based ByteDance’s desire to handle its own fast-expanding cloud-computing needs, the people said. Growing U.S. pressure on the use of Chinese-owned computer services to store Americans’ data accelerated the process, one of the people said. In August, the Trump administration warned against the use of Chinese cloud-computing services including Alibaba’s.

Alibaba Cloud declined to comment on its relationship with Bytedance.

and General Atlantic among its backers and is one of the world’s most valuable tech startups, is building an in-house cloud-computing capability to host its services globally. The company has been gradually unwinding its business on the mainland with Alibaba Cloud, people familiar with the matter said. Bytedance’s operations include the popular news-aggregator app Jinri Toutiao, Alibaba Cloud customer.

That would deal a further blow to Alibaba Cloud, which has plowed billions of dollars into the business and just turned profitable in the past two quarters on the basis of adjusted earnings before interest, taxes, amortization and depreciation.

“We understand that Alibaba Cloud still has material exposure to Bytedance’s domestic cloud workload, and worry that ‘Bytedance risk’ could rear its head again in future quarters,” Bernstein analyst Robin Zhu said in a note Tuesday.

Bytedance was caught up in growing U.S.-China tensions last year, as the Trump administration tried to ban and force the sale of its TikTok app, citing concerns about the security of data collected from its millions of American users. TikTok attracted more than 81 million downloads in the U.S. last year, data from mobile-analytics firm Sensor Tower shows. A U.S. court blocked the ban, and the sale was shelved indefinitely as President Biden reviewed his predecessor’s policy toward the company.

The Chinese firm had kept a backup copy of TikTok’s U.S. data in data centers in Singapore, where one of the cloud providers it used was Alibaba, a person familiar with the matter said.

Major news in the technology sector.

Alibaba was the first Chinese technology giant to make the foray into cloud computing—renting processing power and data-storage services to external clients—by leveraging the already enormous computing needs of its e-commerce marketplace. Cloud brought in $2.6 billion in sales in the March quarter, compared with $24.6 billion for Alibaba’s core commerce business. It is now the largest provider of cloud-infrastructure service in China and the-fourth largest in the world after

Yet Huawei Technologies Co. has been chipping away at Alibaba Cloud’s market share at home. The Chinese telecom giant almost doubled its market share in China to 16% last year from 2019, according to Canalys. Alibaba’s share fell to 41% from 44% over the same period, Canalys data showed.

IDC, another industry-data provider, shows a smaller decline in Alibaba Cloud’s market share in China over the same period.

Last month, Alibaba Cloud revamped its organizational structure to add more geographic managers to give local teams across China more power and accountability for growing sales and retaining customers, people familiar with the company said. The move was seen by some in the company as a direct response to Huawei’s rising market share, the people said.

China’s cloud-computing industry is a restricted one. Regulators require overseas cloud providers to form joint ventures to operate in the country. That has helped Alibaba grow, but the company faces new hurdles as Beijing cracks down on the e-commerce giant, its financial-technology affiliate Ant Group Co. and founder

Regulators hit Alibaba with a record $2.8 billion fine in April for abusing its dominant position over rivals and merchants on its e-commerce platform. Late last year, they halted Ant’s $34 billion IPO as it neared the finish line; this year they forced the fintech giant to restructure as a financial holding company subject to more-stringent regulations.

Alibaba Cloud in recent months has run into difficulty winning new contracts or even securing meetings with some of its government and state-owned enterprise clients, according to people familiar with the matter, as regulators scrutinize its e-commerce business and Ant Group.

The company was the top cloud contractor for central-government departments in the first quarter of 2019, according to state-run Xinhua News Agency.

“As seen in recent quarters, Alibaba Cloud’s revenues have been primarily driven by the continuous growth from customers in the internet, finance and retail industries, and the public sector,” a spokeswoman for the unit said.

Alibaba Cloud isn’t completely shut out—it has landed some government contracts in the past few months, according to government procurement records and company releases.

“The fierce competition in the government market and the complexity in private cloud markets are some of the major challenges toward Alibaba Cloud’s business growth in the domestic market,” Mr. Dai said.